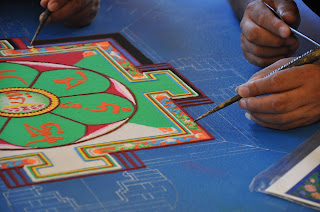 There remained, however, at the moment when the shooting was no longer but to come, the feeling of lightness that I would not know how to translate: freed from life? the infinite opening up? Neither happiness, nor unhappiness. Nor the absence of fear and perhaps already the step beyond. I know, I imagine that this unanalyzable feeling changed what there remained for him of existence. As if the death outside of him could only henceforth collide with the death in him. "I am alive. No, you are dead."
The Instant of my Death - Maurice Blanchot 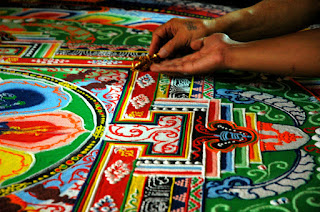 If, on the other hand, it has been possible during life to set going the "backward-flowing", rising movement of the life-forces, if the forces of the anima are mastered by the animus, then a release from external things takes place. They are recognized but not desired. Thus the illusion is robbed of its strength. An inner, ascending circulation of forces takes place. The ego withdraws from its entanglement in the world, and after death remains alive because "interiorization" has prevented the wasting of the life-forces in the outer world. Instead of these being dissipated, they have made within the inner rotation of monad a centre of life which is independent of bodily existence. Such an ego is a god, deus, shên. Such a being survives as long as the inner rotation continues. Also, it can invisibly influence men to great thoughts and noble deeds. The saints and sages of ancient times are beings like these, who for thousands of years have stimulated and educated humanity.

But there remains a limitation. These beings retain a personal character and are therefore subject to the effects of space and time. Neither are they immortal any more than heaven and earth are eternal. Eternal is the golden flower only, which grows out of inner liberation from all bondage to things. A man who reaches this stage transposes ego; he is no longer limited to the monad but penetrates the magic circle of the polar duality of all phenomena and returns to the undivided ONE, Tao.
The Secret of the Golden Flower - Richard Wilhelm 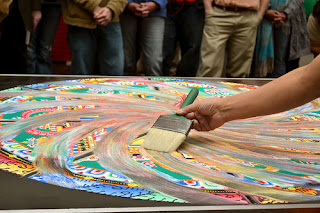 Penrose’s Conformal Cyclic Cosmology [...] is a radical new cosmological model which assumes that the universe consists of a sequence of aeons, each of them a solution of the Einstein equations with sources and positive cosmological constant, each expanding from an initial Big Bang singularity to a space-like future null infinity I, the I of one aeon being identified conformally with the Big Bang of the next. The Equations of Conformal Cyclic Cosmology - Paul Tod