Just finished reading Henri Bergson's Introduction to Metaphysics paper…it feels like a confirmation of some thoughts I've had as well as being not quite enough…though it surely is the first thing I have read by him, so I shouldn't jump the gun…. 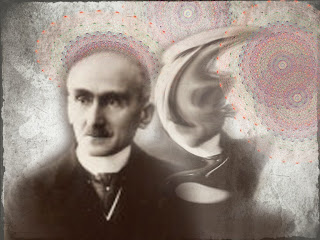 “To exist is to change, to change is to mature, to mature is to go on creating oneself endlessly.”

One thing that struck me is the seemingly appropriateness of Timothy Morton's concept of the mesh to separate these concepts of unity and multiplicity, which would retain a plausibility from a physics standpoint and join the two into a unified state wherein they simply APPEAR to be multiple because of our privative viewpoint.


By intuition is meant the kind of intellectual sympathy by which one places oneself within an object in order to coincide with what is unique in it and consequently inexpressible. Analysis, on the contrary, is the operation which reduces the object to elements already known, that is, to elements common both to it and other objects. To analyze, therefore, is to express a thing as a function of something other than itself. All analysis is thus a translation, a development into symbols, a representation taken from successive points of view from which we note as many resemblances as possible between the new object which we are studying and others which we believe we know already.

In its eternally unsatisfied desire to embrace the object around which it is compelled to turn, analysis multiplies without end the number of its points of view in order to complete its always incomplete representation, and ceaselessly varies its symbols that it may perfect the always imperfect translation. It goes on, therefore, to infinity. But intuition, if intuition is possible, is a simple act.
HB, ItM

I do not feel "at home" in the biosphere. Yet it surrounds me and penetrates me…The more I discover about evolution, the more I realize how my entire physical being is caught up in this meshwork.

A strange masochistic dimension of aesthetic experience opens up underneath the one in which the "art object" and I appear to be held in a perfect Kantian mind meld. Prior to this appearance of the beautiful, there must already be a sticky mesh of viscosity in which I find myself tuned by the object, an aesthetic uterus that subtends even my supposed acts of transcendence.
TM Hyperobjects


To think of each possible layer of abstraction out/away from whatever shared reality is as a cognitive mesh through which other concepts or substances or what have you are filtered through would transform this difference between unity and multiplicity into a 'separating-out' of NOWs in order to abstract FROM them….you get something remarkably like quantum physics' 'every measurement is really only a probability' bit….I see no convincing reason to think that just because I have a powder that came from a grain, that there is no connection back at all…just because an operation splits them doesn't mean it can't be recombined, or that there is any loss of atomic unity in the powder. The math involved is just several orders of magnitude more complex to recombine a multiplicity than to split a unity. Destruction has always been easier than creation.


There is a succession of states, each of which announces that which follows and contains that which precedes it. They can, properly speaking, only be said to form multiple states when I have already passed them and turn back to observe their track. Whilst I was experiencing them they were so solidly organized, so profoundly animated with a common life, that I could not have said where any one of them finished or where another commenced. In reality no one of them begins or ends, but all extend into each other.
This inner life may be compared to the unrolling of a coil, for there is no living being who does not feel himself gradually to the end of his role; and to live is to grow old. But it may just as well be compared to a continual rolling up, like that of a thread on a ball, for our past follows us, it swells incessantly with the present that it picks up on its way; and consciousness means memory.
But actually it is neither an unrolling nor a rolling up, for these two similes evoke the idea of lines and surfaces whose parts are homogeneous and superposable on one another. Now, there are no two identical moments in the life of the same conscious being.
HB, ItM

Very zen thoughts, that life is never this-or-that, but always and never both, all the time, but he insists on the existence of a hard separation, the impossible gap, for so much of the paper that it sincerely caught me off guard when he expresses his thoughts that science AND metaphysics miss the same point, that it is the academic and science worlds that are failing to answer the metaphysical questions because THEY insist on the gap…and it was really only then that I realized he is in favor of the unification of these supposed opposites and the paper suddenly made a lot more sense, not to mention that I felt rather foolish…now I re-read it as an attempt at the beginning of a diagonal lemma that could be built up into a sort of science of intuition, a philosophy of the myriad ways in which the absolute breaks down and is reconstructed. Deconstruction circles round and builds a thing again. The bridge over the gap is revealed as merely a bridge, and not the space within or around the gap. But the utility of the bridge is not underestimated either, not to mention that visual of being able to feel the gap from way out on the middle of a bridge over it, rather than from either side.

If the Outside is to get through our mental filtration system it has to flood the mesh or retract from it until we are "butchered open from within" by its presence or abject loss. Intuition happens on its own all the time, but science has us well trained to ignore what we feel and see in exchange for a normative average of how everyone feels or sees….lots of other thoughts. Must percolate.

babble babble….on another not entirely unrelated note, blog I discovered today that is worth a read: Alexander Dunst on PKD