reminder : you have zero events today


A mistake is lost to time, encoded hard coded for you forever and never amen
And to every one else?
A passing joke, a glitch.
That you could laugh at too
If you weren't mourning what was lost to that moment.

The sigh, the hesitation when you THINK the true answer before you speak the filtered concept is the Tao.

The way that can be told is not the way.
It has to be FELT.
Not emotionally, ie: "feelings", but through the utter cessation of the bodily remnants of mind (the difference between feelings and FEELING. Feelings can be hurt, because pain is an illusion and emotion is distorted memory. SENSORIAL FEELING is the natural state of true existence and the basic function that makes NAVIGATION possible in any dimension for any entity-you feel, so you can orient, so you can think spatially if nothing else). As in, no words can fully express the impact of the Real, to even attempt to describe the event in simple words degrades the memory and generates anxiety and false consciousness because of the failures of others to understand your depth of explanation(because your explanation-signal will be distorted by emotional response to the event).

Images are always better than words
I think 1000 images before I can utter a word in the morning
1000x1000 words worth of thought before I can manage coffee
And my words are small, infinitesimal, singular atoms within the free flowing world-current that is my thought. 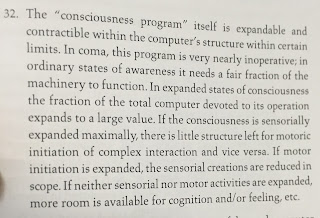 John C Lilly - Programming and Metaprogramming in the Human Biocomputer

Pure self is not-interjecting the energy of YOU into the false construct of self, the energy that animates it and generates the illusion. Selflessness is the generative force of YOUness projecting away from your bodily artifact, energising the communal structure at the expense of the self-structure. LOVE is selfless or it isn't love; the self is not love as long as it isn't not-ing.
Tied in knots yet? Because this is yoga, too.
That the "lost" is the Tao gives the inherent proof that Nothing is Ever Lost. Trusting in the spiral to eternally return meaningful content to your attention (it is the Tao's "job" to present you with the truth in infinite disguises, after all), this trust in the Way to eternally puzzle you into submission is the slayer of guilt. The slayer of worry, the slayer of the shame of forgetfulness, the driver of disciplined open-ness. Faith. Pretty simple thing, despite its difficulty.
at 3:54 PM